Plain and simple, Steven Cooper loves to dribble a basketball. Earlier this summer, he put his love of dribbling to good, ambitious use. Dribbling a basketball with every step, he began a journey that ultimately will be more than 3,000 miles long.

Cooper’s unusual effort takes him to colleges to raise money for his 7773 Foundation, which supports various charities for both adults and children.

This weekend, he dribbled into Blacksburg where cheering Hokie fans took time out to lend their support to Cooper’s project.

This year’s adventure will take him to major universities that will play in the Maui Invitational college basketball tournament slated for the Thanksgiving holiday. Virginia Tech is one of those schools, and he dribbled near Lane Stadium shortly before the kickoff of Saturday’s football game.

Cooper founded the 7773 Foundation in 2014 after his mother was diagnosed with cancer. At first, he was determined to run marathons in her honor. Following her death in 2015, he continued that effort with an extra routine of dribbling a basketball as he ran. In 2016, he completed over 3,700 miles dribbling the roundball during those races.

“I was running while I was in the Marine Corps in 2011 when I looked over and saw a playground with basketball courts, and I thought it would be fun to run the marathons while dribbling. I saw a kid on the side of the road and offered him $20 to find me a basketball and the rest is history. He brought it back, and I have been dribbling ever since,” Cooper said Sunday while taking a break from his mammoth trip.

Earlier this year, he decided to dribble across America.  Now he has seven basketballs and seven pairs of tennis shoes. “I grew up dribbling a basketball so it has become second nature for me to do this,” he said.

The tie-in with the Maui basketball tournament has also been easy for him. While he  was working in Hawaii in 2004, he discovered his alma mater UNC was playing in the tournament. He bought a ticket and has not missed one of the Maui Classic games since.

Cooper said the response to his “dribbling” effort has been phenomenal. “This is all about giving back and raising monies for deserving charities.”

Cooper will continue his trek with stops at Michigan State, Kansas, Dayton, Brigham Young, and UCLA.

As part of Cooper’s fundraising this year, he is giving away the UNC-themed Tesla he has following him around the country. To find out more about his effort and a chance to win the automobile, go to: https://www.7773foundation.org/donate. 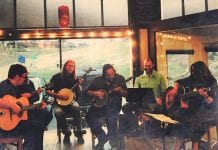